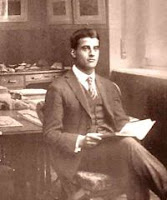 Pier Giorgio Frassati, [See “Saint GQ” Thursday, January 14, 2010] just before receiving his university degree contracted polio, which doctors later speculated he caught from the sick whom he tended. Neglecting his own health because his grandmother was dying, he died after six days of terrible suffering on July 4, 1925 at the age of 24. His last concern was for the poor. On the eve of his death, with a paralyzed hand, he scribbled a message for a friend remembering the injections for Converso, a poor man he had been assisting.

His funeral was a triumph: the streets of the city were lined with a multitude of mourners, unknown to his family -- the poor and the needy whom he had served so unselfishly for seven years. Many of these poor people, in turn, had been surprised to learn that the saintly young man they knew was the heir of the Frassati family fortune.

As we remember Pier Giorgio, may the inspiration of his words and example live on in our own lives today . . .

"Jesus comes to me every morning in Holy Communion: I repay him in my very small way by visiting the poor".

"Seeing daily the faith with which families often bear the most atrocious sufferings, their constant sacrifices, and that they do all this for the love of God often makes us ask why I, who have so many things from God, have always been so neglectful, so bad, while they, who have not been privileged like me are infinitely better than me?"

"We have the duty of putting our [good] health at the service of those who do not posses it. To act otherwise would be to betray the gift of God."

One of his favorite ministries was the Cottolengo Hospital (a medical facility for the physically and mentally handicapped). He would wander thorough the corridors with a secure and steady spirit of charity consoling the wretched. He would stop to talk to each patient as though they were really his brothers. He would bring them money, candy and clothes and would never forget to kiss them with warm affection as though they were the closest of friends, not even stopping to think of the possible risk of infection or having any hint of human repulsion.

Amazed, people saw this young man drag hand carts through the streets of Turin filled with household goods of the poor who were looking for a home. He would enter the most squalid houses and give all the money he had so that he did not have enough money to take the bus home.

Pier Giorgio Frassati was declared “Blessed” by John Paul II who said of him, “[He was] passionately eager to serve brothers and consumed by burning charity which led him to approach, in order of absolute precedence, the poor and the sick.” John Paul II-Turin, April 15,1980
_______________
The next StreetReach days helping the homeless living on our very own American streets are coming this weekend. Please partner with us to sponsor water ($20), van insurance ($50), Bibles ($75), and there is an urgent need for van upkeep. Donate at: http://www.servantsofthefather.org/donation_homeless or post checks to - Servants of the Father of Mercy, Inc., P.O. Box 42001, Los Angeles, CA 90042.
All Donations are Tax Deductible
Posted by Jesus was Homeless at 5:07 AM